On Wednesday evening, June 24, the Boston Redevelopment Authority will welcome the general public to a community hearing on the Municipal Harbor Planning process. The goal of this congregation, as has been with similar ones held prior and surely more to come, is to hammer out details for waterfront development proposals – the most notable being Don Chiofaro’s attempt to re-imagine the Harbor Garage.

Though Chiofaro has yet to formally file the necessary paperwork to undergo the BRA’s proposal review process, he’s been soliciting feedback on his plan for a dual-tower development, one 600-feet tall the other 500-feet, where the Harbor Garage currently resides from both residents and officials. 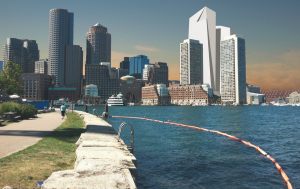 In that regard, the BRA has offered up recommendations for how Chiofaro might curry approval of his development though they did not guarantee such.

But what’s most interesting with how the BRA is pressing forward with Chiofaro’s plan, albeit slowly and cautiously, is how willing it is to forego state and city regulations intended to protect and preserve the waterfront, Rose Kennedy Greenway and Boston skyline.

Currently, guidelines drafted in 2010 as part of the Greenway’s inception cap the height of a structure built on the Harbor Garage site at 200-feet and 400,000-square feet. Any building project on the harbor front must also allow for 50 percent of the land parcel the applicable land parcel(s) to remain as open space – that is, uncovered year round.

Chiofaro is peddling a project that’s 600-feet tall at its highest and 1.3 million-square feet with no offering of open space.

At the last MHP hearing, though, the BRA said it would entertain that height and a square footage of 875,000 maximum.

But several waterfront projects have come before the BRA in recent years and none have received the kind of leeway being afford to Chiofaro’s brainchild.

What worries abutters like Harbor Towers the most is the precedent this sets for any prospective development along Boston Harbor. If Mayor Marty Walsh’s administration is so open and willing to supersede these protective measures, it doesn’t necessarily bode well for the future state of Downtown Boston’s coastline development.

That’s not to say Harbor Towers wants the monstrosity that is the Harbor Garage to remain. It wants something progressive and unconventional built there, so long as it adheres to, or closer to, the current policy.

The following table lists seven local projects subjected to the same state and/or city constraints as the Chiofaro project. It also shows the amount of height and open space accompanied each.

Not one was built (or is being built) above 400-feet and while some of the projects technically boast less than the 50 percent of the open space required of them, the developers were able to compensate for that by, for example, converting parking to open space, activating terraces and walkways, and building bike paths, floating docks and other accessible amenities.

On Wednesday night the BRA will convene at 6 p.m. at Atlantic Wharf’s Fort Point Room located at 290 Congress Street to hear more from proponents, opponents and anyone willing to share their opinion on the matter.

Though there’s still plenty of time before the BRA officially takes the proposal under review, it’ll be interesting to see what kind of feedback is taken into account and how Chiofaro may, or may not, alter his plans to better comply with the state and city.

Aquarium says tower plan could threaten sea animals, finances It’s not your imagination. Your Boston commute is getting worse.
Scroll to top