After eight years of trying, developer Don Chiofaro is about to receive preliminary approval from Boston officials to build one of the city’s tallest towers, a megaproject that would redefine one of the most prominent stretches of the waterfront.

Boston Redevelopment Authority officials said they plan to recommend Wednesday that a skyscraper on the site of the Boston Harbor Garage be allowed to reach up to 600 feet. That would essentially match the taller of the two buildings Chiofaro has proposed for the property and would be far taller than any other neighboring building overlooking the harbor.

But Chiofaro would not get everything he wants: City officials will propose to limit development at the garage site to 900,000 square feet. The two-building complex proposed by Chiofaro last year would total 1.3 million square feet, with a mix of offices, residential units, and other uses.

Chiofaro declined to comment, so it’s unclear whether the smaller building area would limit the developer to one tower instead of two.

City officials said that decision would be up to Chiofaro. 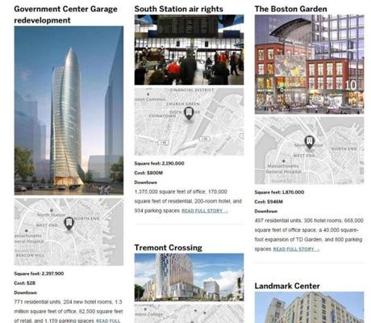 Big Boston projects in the works

“We don’t want to be too proscriptive,” said Richard McGuinness, deputy director for waterfront planning at the redevelopment authority. “What we’re going to recommend . . . is a variety of scenarios that could be built out. You could do two towers. You could do one single, slender tower.”

Still, the signal from City Hall is a major turnabout for the colorful developer, who clashed with Thomas M. Menino, the previous mayor, over the Harbor Garage site, which is next to the New England Aquarium. With the site’s location only a few feet from the waterfront and abutting the Rose Fitzgerald Kennedy Greenway, Menino wanted to limit any new building to 200 feet in height.

But when Mayor Martin J. Walsh took office in 2014, he made it clear he wanted something to happen at that property — a signature project that could increase access to the waterfront.

Chiofaro and his financial backer, Prudential Real Estate Investors, bought the 1,400-space garage for more than $150 million in 2007. Over the years, Chiofaro has informally floated several versions of a massive complex for the garage site. A recent plan called for a 600-foot tower and a second slightly shorter one.

Current rules limit Chiofaro to 300,000 square feet in total development and a building height of about 150 feet.

To exceed those limits, a developer would have to provide offsetting public benefits, such as improved access to the waterfront and related amenities.

In Chiofaro’s case, he has proposed building an atrium or arcade-like space between the two buildings that would be open to the public and provide direct access to the waterfront. Images released by Chiofaro show a landscaped public space that changes with the seasons — a covered winter garden in cold weather, a farmers market in the fall.

The Walsh administration’s proposal for the Harbor Garage site will be made as part of a larger land-use plan being released Wednesday for the nearly half-mile stretch of waterfront between Christopher Columbus Park and the Moakley Bridge, which leads to the Seaport District. Because the area in question involves state-regulated tidelands, the plan will need to be approved by Massachusetts environmental regulators.

City officials are also recommending that significant additional development be allowed for just two other properties in that strip: the Hook Lobster site at the foot of the Moakley Bridge, where a nearly 300-foot residential tower is planned, and the Marriott Long Wharf hotel property, where additional ground-level retail spaces are proposed.

McGuinness said the plan will also include recommendations for public improvements, such as a boardwalk that could go under the bridge or converting part of State Street near the waterfront into a pedestrian plaza.

But the future of Chiofaro’s 1.3-acre property was the most anticipated variable, the one that neighbors wondered and worried about.

Residents of the twin Harbor Towers next door were already expressing concerns as details of the harbor plan emerged late Tuesday. Lee Kozol, who represents residents on the garage redevelopment, said that at 900,000 square feet, the proposed development would limit public access to the waterfront and set a bad precedent for development nearby.

“We appreciate the hard work the BRA and Walsh administration have put into this, and we are gratified that they agree the proposed 1.3 million square feet was excessive for this sensitive block on the Harbor and Greenway,” Kozol said in a statement. But, he added, “serious questions remain about whether this scale of development belongs on Boston’s waterfront, understanding that it would be only the first of many like it.”

The open space and public access issues will weigh heavily on Chiofaro’s plan. State officials already have determined that the atrium between the two buildings cannot be counted toward open space because it would have a retractable glass roof. But McGuinness said city officials could ask the state to waive its open space requirements if Chiofaro commits to appropriate mitigation efforts.

Another issue weighing on the city: new development guidelines adopted for the properties along the Greenway in 2010. The guidelines suggest a slightly higher height allowance for the garage site — 200 feet, still much shorter than what Chiofaro is seeking.

McGuinness, of the BRA, said the new administration wanted a big enough project to ensure that tearing down the garage and putting parking spaces underground at that site would be economically feasible. Residents of the 400-foot-tall Harbor Towers have a long-term lease to use a portion of the garage, and the New England Aquarium also relies on it.

“The Greenway guidelines didn’t address what type of density would promote getting rid of the garage,” McGuinness said. “They never really looked at what happened on the water’s edge and what would be appropriate density to encourage something different happening here.”