A resident opposition group formed last year when the first iteration of the project became public at a Neighborhood Council meeting. A handout and poster titled “Save the North End/Waterfront” stated, “This development would significantly eliminate the natural vista enjoyed by Boston residents and thousands of visitors who pass this area of Commercial Street and Atlantic Avenue. This massive development seeks to change the nature and character of our historic residential waterfront neighborhood.”

Large posters displayed at the meeting showed compromised view corridors of Boston Harbor by the proposed two-building hotel development, even at the zoned 55 foot height. “Why do they say they want to increase access to the harbor when it’s obviously blocking it?” one resident queried in a recurring sentiment expressed at the meeting that a hotel could close off the area. “It may be appropriate for the Seaport District, where they are converting vacant, commercial parking lots but it is not appropriate for the historical enclave of the North End/Waterfront residential district,” stated the group’s position in a handout at the meeting.

Traffic conditions along Atlantic Avenue were raised as a primary concern, especially with the increase in cars that would come from a 300-key hotel. Many residents said that recently completed development projects along Boston’s waterfront have already caused gridlock. One man said, “It can take an hour to drive from South Station to the North End,” a distance of about one mile. Several attendees cited the recent loss of a vehicle lane for bike lanes, saying the situation will only get worse when the approved bike cycle track narrows the road further.

Rep. Michlewitz speaks to the crowd at the Pilot House.
(Photo by Edward L. Amaral, Jr.) 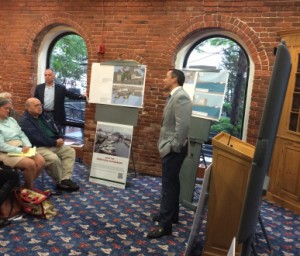 Rep. Michlewitz said he receives 8-10 emails a day regarding development concerns in what he called the “greatest construction boom in Boston since the Industrial Revolution.” He sympathized with neighbor concerns regarding more waterfront buildings. “I believe that Battery Wharf Hotel was a failure in that it did not bring an increase in open space to the waterfront,” said Michlewitz. Prince Building resident Doug Sheffe added, “We don’t need a hotel to get more green space.”

Concerns about noise from hotel functions and proposed rooftop lounges were also raised at the meeting. One resident said, “Noise is already a big problem with so much late night activity.” Environmental deterioration of the area was also noted by a mother in attendance who said that her “windowsill already gets black from the pollution.”

Many residents expressed futility at the process and “broken promises,” citing concerns about property values and the quality of life issues that may come with the new hotel development.

Rep. Michlewitz offered guidance to the frustrated crowd as to how they can get involved in the public process.”Filling the room like you have done tonight at these public meetings is important. I’ve seen public opinion change the course of proposed development,” Rep. Michlewitz said. “At 585 Commercial Street, public opposition to a private development eventually paved the way for a new public school in the North End.”

The Boston Redevelopment Authority is expected to conduct a large project “Article 80 review” that will include an Impact Advisory Group (IAG) including residents and appointees of public officials. The BRA Board is expected to be the primary approval entity for the project. The State also has a role through Chapter 91 compliance, a determination by the Department of Environmental Protection (DEP).

Vivien Li, President of The Boston Harbor Association commended the group on banding together in such an “impressive showing.” She advised Rep. Michlewitz to take State officials on a site tour with residents before they make a determination of where a developer can build on the water. “DEP’s determination of whether the site can be built on is the key,” Li said.

The group is also considering its legal options to oppose the project. Organizer Doug Sheffe said, “There are at least 20 ways to stop this project. The question is how we are going to win this fight, not how we are going to lose it.” He encouraged residents to go back to their respective buildings and prepare their boards to fund a legal battle.

Specifically, residents are counting on the legal protection granted to Lewis Wharf in 1832 by the Massachusetts Legislature and a 1979 court ruling regarding the piling field.

The following is from a handout at the meeting:

Harbor tidelands, over which the proposed project would be constructed, have been recognized since the beginning of our nation to be a unique kind of property, subject to a public trust for the benefit of all who seek to use the harbor. Title to the land under the pilings at the end of Lewis Wharf was conveyed by a grant of the Massachusetts Legislature in 1832 to the Lewis Wharf Company. The grant was specifically made subject to a “public trust” and to be used for a “public purpose.” That specific restriction on the land at the end of Lewis Wharf, consistent with other public tidelands, continues to this day. In the case of Boston Waterfront Development Corp. v. Commonwealth of Massachusetts, 378 Mass 369 (1979), the Supreme Judicial Court addressed the very land and pilings in question at the end of Lewis Wharf. The Court held that “the land in question is subject to the condition that it be used for a public purpose related to the promot(ion of) trade and commerce by enabling and encouraging the owners of flats to build wharves, warehouses and other structures thereon for the use and convenience of …. those having occasion to resort to the ports and harbors.” What the developer is proposing to do at Lewis Wharf is “NOT” for the benefit of marine commerce or for a “public purpose.”

The “Save The North End/Waterfront” group referred to the precedent the project may set for the neighborhood. Joanne Hayes-Rines shared her experience from Harbor Towers and the proposed Chiofaro tower project that recently gained favor with the BRA from changing waterfront guidelines. She encouraged residents to view more information at the Preserve Boston’s Waterfront web site.